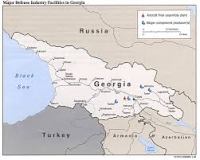 20 years of Georgia’s independence-this means 20 years of ethno-political conflicts surrounding the secession territories of Abkhazia and South Osetia. This is the worst legacy that Georgia has inherited from the Soviet era. The consequences are to be felt to the present day as a festering wound. He political, economic, social and cultural developmentt of independent Georgia cannot be understood without them. As long as these conflicts are not settled by mutual agreement, the country will remain in a condition of latent instability.

The causes of the conflicts reach far back into Soviet times, in which Abkhazia had the status of an autonomous republic, South Ossetia that of an autonomous region within the Soviet Republic of Georgia. There were tensions time and again already then, especially between the Abkhaz and Georgians, which were reflected in several public protest rallies. However, the Soviet state, with its centrally organized unity party, was able to present the then more or less completely sealed off Caucasus as a place of harmony between the various ethnicities. This version was not so far off the mark in the case of Ossetians. Iinn the past, the Georgians in fact had managed to get along with them without much tension. Among the minorities living in Georgia, the Ossetians were one of th most integrated groups. This is proven also by dynastic connections between Ossetian feudal  lords and the royal family of Georgia, which had come into being already in the epoch before Russian colonization.

So the news of the outbreak of armed conflict came all the more as a surprise between the Ossetians and Goergians in he region of Tskhinvali, which had started to flare up already during the last days of Soviet rule in late 1989. At the beginning of 1991, it entered into an acute stage. It was provoked by the Georgian government that had just taken office under President Gamsakhurdia, which resorted to military force in its attempts at amending the South Ossetian status of autonomy. A ceasefire agreement, brokered by Russia and signed in Sochi in June 1992, more or less withdrew jurisdiction over South Ossetia from the Georgian central state. As a result, this armed conflict left some 2, 500 people dead, including many civilians, as well as about 60, 00 internally displaced persons, many of whom took flight across the border to North Ossetia.

Under Gamsakhurdia’s successor Shevardnadze, Georgian military units invaded Abkhazia shortly afterwards, in August 1992, following several constructional disputes between Tbilisi and Sukhumi over the preceding months. A bloody war followed, which ended with the withdrawal of Georgia from Abkhazia and the latter’s factual independence, forced to a large degree by Russian arms aid. Again, the balance was shocking: Abkhazia, which used to be one of the most prosperous parts of the country during Soviet times, was left devastated. This time, there were about 8, 000fatalities and some 250, 000 internally great majority among them Georgians.

Despite manifold political efforts, these two conflicts remained “frozen” over the years to come. The August War of 2008 brought a further dramatic aggravation by Russia onbehalf of South Ossetia and Abkhazia. This cemented a situation that had existed since the beginning of the 1990s of a secession of the two territories from Georgia. With the recognition of Abkhazia and Souеh Ossetia as independent countries by Rusia and three further states thus far, the secession took on a new quality under international law. Due to the August War, all previous efforts undertaken to settle the conflicts were rendered futile.

The re-legitimazation of military violence as a means of solving conflicts had a psychologically disastrous effect, as the renunciation of the use of force had been one of the few positions that all parties to the conflict had shared. A further consequence of the August Was was the collapse of teу conflict settlement mechanisms agreed among the conflicting parties thus far, including the Joint Control Commission for Georgian-Ossetian Conflict Resolution (JCC) and the Joint Consultative Group (JCG) for the Abkhaz conflict. Further more, existing mandates for conflict settlement were either terminated or not extended for the Organization for Security and Co-operation in Europe (OSCE) and the United Nations(UN). The principle of territorial integrity was also shattered, which had been advocated as a legal foundation for any settlement by all the mediators, including Russia, before.