The Fortress and Monastery complex of Akhtala is located in Lori region of Armenia, in the village named Akhtala.

In Kvemo Qartly, on the river Debeda, there is one of the most important Georgian Monastery Akhtala. Its old name was Coppermine Monastery. Establishment of Akhtala Episcopal Cathedral is linked to Vakhtang Gorgasali. He founded Episcopal residence, which was the most important spiritual centre of the region for a long time.

In the end of the IX century Kvemo Kartli was gradually dominated by Armenian Bagratuni. At first they controlled the gorge of Debeda, but in the XI century domination of Bagratuni ended in kvemo kartli except this region.

In the area of Akhtala there was found Qvajvari with Armenian inscription on it. It was about the erection of the Cross which was made by Mary, a daughter of Kvirike, for Akhpati the Holy Virgin Mary in Pghndzavank.  They were ancestors of Armenian Bagratuni of Lore-Tashiri. The XIII century Armenian historians Kirakos Gandzaketsi and Vardan Areveltsi inform us that Zakaria Mkhargrdzeli’s(Long-armed) brother Ivane Atabagi became orthodox and built a Georgian temple there. He was buried there.

There are three churches in monastery complex even today: The church of Holy virgin, the church of the Holy Trinity (consisting of two connected churches, a chapel, outside hall, and underground constructions). St. George church-the western part of the Holy Virgin church.

The church of Holy Virgin is situated in the middle of the fortress’ territory. It belongs to the domed basilica type of churches, where the bearings join with the side-chapels of the Apse. Two pairs of arches divided the longitudinal stretched prayer hall into three naves, the central one of which (with double side-chapels) on the eastern side ends with low staged, half-rounded apse and the side-chapels end with sacristies.

Signs of Georgian constructions remain in the structure of the scheme and in architectural decorations that have a Georgian style. This is evidenced by the vaulted vestibules on the eastern side, the relief crosses over the edges, the alcoves bordered with pillars and their scalloped bays, as well as the lavishly used decorative motives. 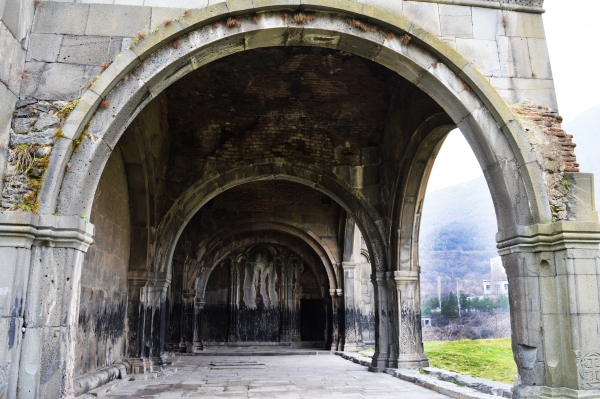 The Holy Virgin’s church is famous for its first-rate and highly artistic frescos, with which are covered the inside walls, the partitions, and the bearings. They are characterized with perfect iconography, richness of theme and variety of different colors (where blue rules). Especially outstanding are the Virgin on a throne, the sacred communion, Hovanes Karapet frescoes, as well as pictures of saints till the waist or standing in whole length, on the pillars and the bearings. 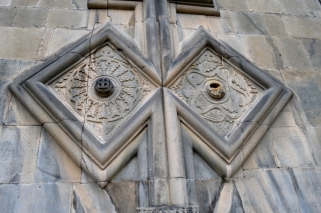 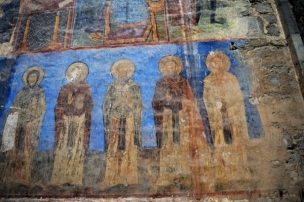 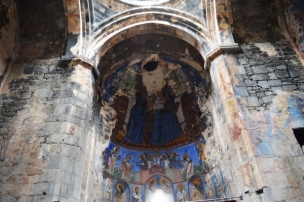 In the territory of the temple on the northwestern side there is a one-nave vaulted church and its half-rounded apse going out from the eastern wall’s borders. The only entrance is from western side, surrounded with a trench. There used to be a vestibule with a gable roof, which has not survived.

Parallel to the north of the Holy Virgin’s church the two-storied building of the temple friary stood, whose walls are preserved. It was a roomy hall with wooden roof, for which the exterior fortress wall served also as its eastern wall. The northern wall is half-rounded, and an entrance to the underground tunnel opens here. 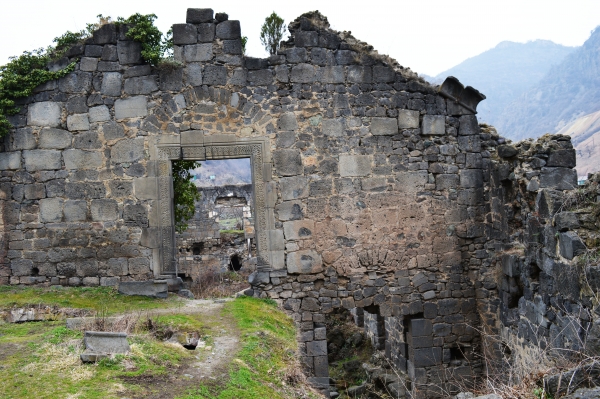 The Monastery of Akhtala is one of the very few orthodox monasteries in Armenia, which was erected in the times of Armenian Renaissance. The fortress of Akhtala was built on an elevated rocky outcrop surrounded by deep canyons. It belonged to Georgian orthodox churches until 1921. Still today there are lots of signs of Georgian culture.

Currently the monastery has its pilgrimage days on September 20–21 Armenians, Greeks and Georgians visit the monastery on this occasion.