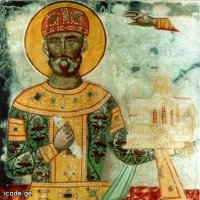 11th century Georgia had the strength to successfully oppose the Seljuk hordes, but it was difficult to mobilize the population.

At this juncture, as Georgia faced severe threats from both within and without, a revolution took place at the Georgian royal court-the still young Giorgi II was forced to abdicate and his place was taken by his son, David IV describes this event poetically: “… in an eternal gloom, there began to down the sun of all kingdoms, the one great in repute and greater in deeds, the homonym of David the father of God, and David seventy-eighth descendant-David”.

The sixteen-year-old David received a troubled inheritance: a country ravaged by Seljuks, a famished population hiding in the mountains, deserted cities, fortresses, and villages.

Measures for strengthening the king’s power and centralizing the country

The Seljuk invasion fundamentally changed the political situation in the Caucasus and the Near East. The debilitated Byzantine Empire yielded the political stage to the Seljuk Turks, whose formidable influence overshadowed the countries of Transcaucasia: Armenia, Albania, eastern and southern Georgia.

The nomadic Seljuks were quite different from the Arabs and the Byzantines. They settled on the conquered territory and occupied the lands necessary for economic subsistence. The Seljuk herdsmen’s nomadic economy was incompatible with the Georgian feudal economy, but was instituted along the banks of agriculture of the region gave place to pastures. The Seljuk conquests were thus much more destructive and  ruinous than the invasions and domination of the Arabs or Byzantines. The “Turkish conquest” deprived the Gorgian economy of its foundations and placed it in danger of extinction. This situation greatly hindered efforts towards unification and centralization in Georgia and in the Caucasus in general.

The Georgian kingdom was in such a deplorable situation that the hegemony of its king embraced only Western Georgia: “The frontier of the kingdom was then the lesser mountain of Lixi, and the royal residence was at Cagulis’tavi”. When the king wanted to hunt in the grove of Kartli or in Nacharmagevi, he sent people beforehand to examine the places and went there only after this was done.

David the Builder assembled people who were faithful to him, and sought to rule the country with their support. The Georgian royal court mustered detachments of horsemen faithful to the king. It was thee very men-at-arms with who he attacked the Seljuk Turks, defeated them, and in this way created the necessary conditions for the rural population hiding in the mountains to come down again to the valleys. David the Builder gradually drove the Seljuks out of Kartli. This series of small victories revived the belief of the Georgian people in their own strength. The country gradually returned to an intensive agricultural economy. The cities began to prosper little by little.

The might of the Seljuk Turks  began to weaken gradually after sultan Malik-Shah’s death (1092). This, in turn, provided an impetus for the restoration of Georgia’s political might. With the weakening of the foreign enemy, the recalcitrant feudal lords of the country no longer presented a great danger.

One thought on “David The Builder”