Once a year, on the seventh week after Easter people from all parts of Georgia and also from both sides of the Administrative Boundary Line gather to celebrate Lomisoba at the Lomisi Monastery near the village of Mleta, about 10 km South of Gudauri. The centre of Lomisoba festival is Lomisoba St George’s church on the top of a high mountain. It was summer, 2008 when I first visited the site and I got an unforgettable experience of climbing the mountain when it was fog and hailing. Unfortunately no photographs are kept of the day because of rain and hail my camera broke down. After that day I visited the place three times and I am going this year too.Before climbing up we always visit the St George’s church in Mleta, attend a little part of liturgy there as the liturgy has always finished by the time we reach the church on the mountain. Though this time we were lucky. When we entered the church the ceremony was still going on. 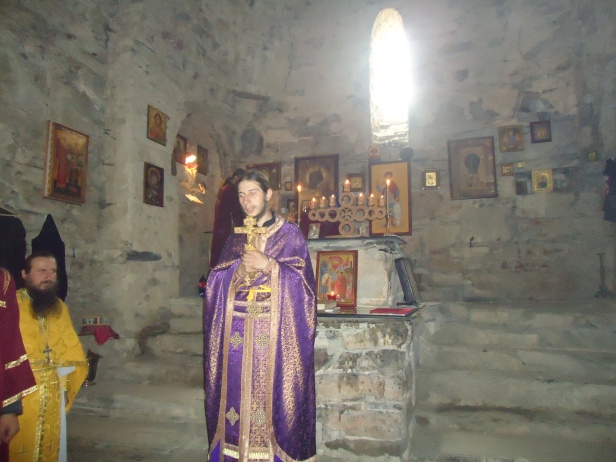 According to the monks living permanently in the monastery, the first pilgrims arrive at about 3 o’clolck in the morning and set up their camps at the holy site. During the day families with small babies and the elderly manage the long and exhausting climb up to the Lomisoba St George’s church at 2300 meters above the sea level. It took us two hours to reach the site on foot. There is no road but a path, which is difficult to walk in rainy weather. 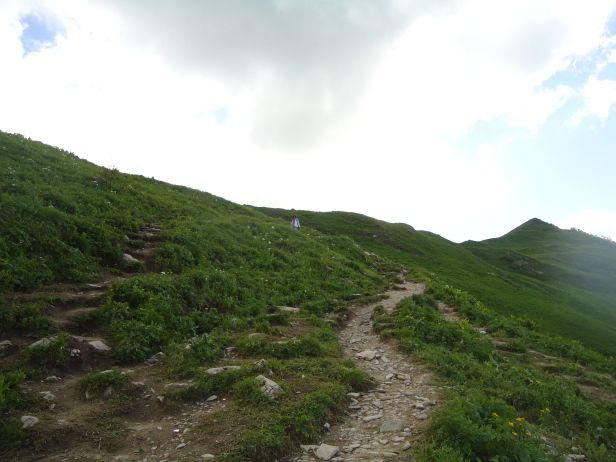 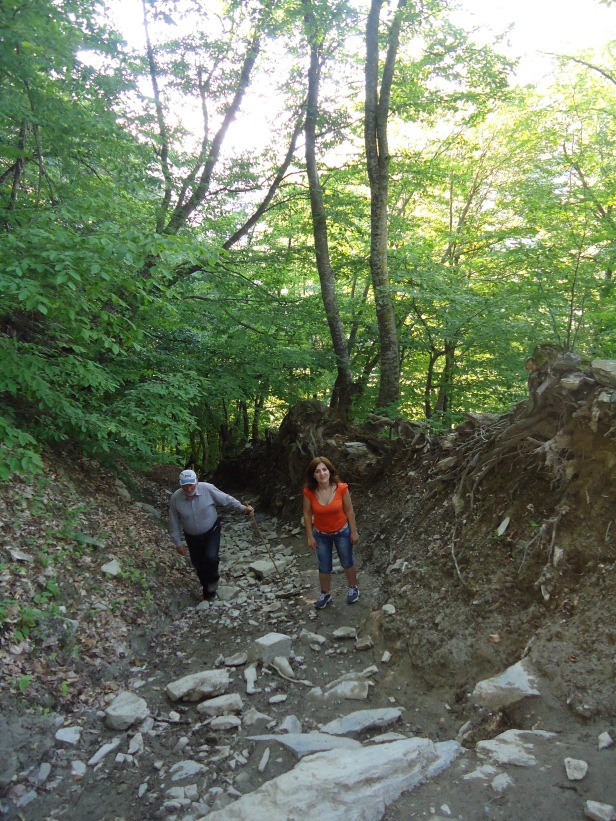 Lomisoba dates back to the pre- Christian period, but nowadays it is celebrated as a Christian religious festival. Even nowadays the festival has many pagan rituals, such as animal sacrifice, and we witnessed the slaughter of sheep.There is the legend connected with Lomisa.  According to it in the 13th century, when the Khwarazmid army headed by Jalal-Ed-Din invaded the country, 7000 inhabitants of Aragvi gorge were taken hostage. The captured took the icon of St. George with them. According to the legend the icon brought the drought to the Khwarazmid country. The frustrated sultan asked for magicians, which said that the reason for this disaster was the icon brought from Georgia. First Sultan ordered the icon to be burnt. However, it flew out of the fire, placed of the horns of the white bull. The bull with the icon did not move, until the last host was set free.  So, the 7000 Georgians started to move back to their homeland. In every place they stopped they have built the niche-shrine. Finally after the long way, the icon settled on the Mountain in Mleta, where the Lomisa church stands now. Later this place has been pilgrimised by the daughter of noble Dadiani, which brought the huge heavy chain with her shoulders up to the church. Another story tells that St. George has miraculously saved one of Georgian hostages and as a sign of his appreciation the saved one has devoted the chain to the Lomisa church. This huge chain is still found in the church and everybody can put it on the neck and make a wish.

The 9th-10th century church of St. George is among the peculiar monuments of Georgian architecture. It is located on the top of the range which divides Ksani and Aragvi River gorges.

There is the assumption that the church initially was the pagan shrine dedicated to the moon deity, on the place of which the Christian church was built later.

Lomisa was the main shrine of the people living in Mtiuleti and Ksani River gorge. Very important political, military and economic issues were negotiated here.
The church built of rough stone is a triple-church basilica, in which the nave and aisles are separated by solid, continuous walls instead of by colonnades.  The peculiarity of this church lies in the fact that in the middle of its interior stands the column, which doesn’t have any constructional function. Some scholars argue that it might symbolically represent “The Life-giving pillar” of Svetitskhoveli, However, it might also cross with the tradition of “dedabodzi” – central column in the mid of the interior of Georgian dwelling houses, also found in this region. 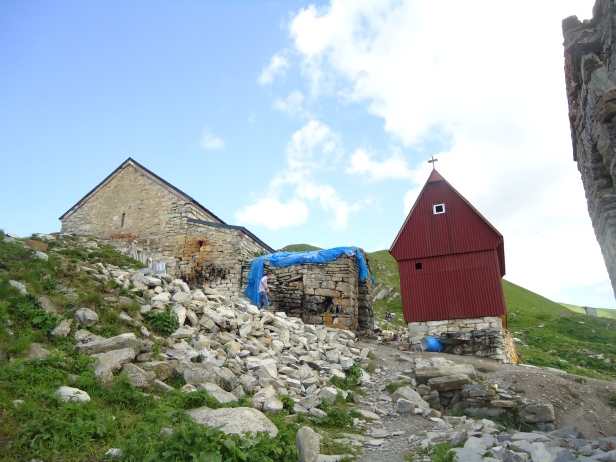 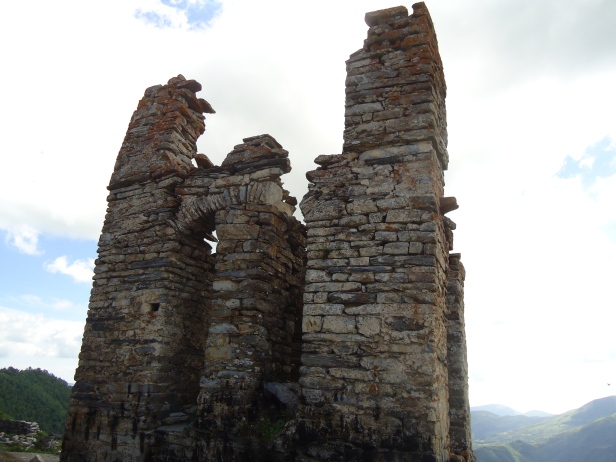 There is another legend about the door of the church.  The church had an oak door. Once, a king’s army had a rest in the mountain. They couldn’t find wood nearby to cook their meal so they chopped the door of the church and cooked their dinner. The ones, who ate the meal, got blind. The leader prayed for healing and promised to make an iron door. They were healed so the leader kept his promise and the church has iron door today. 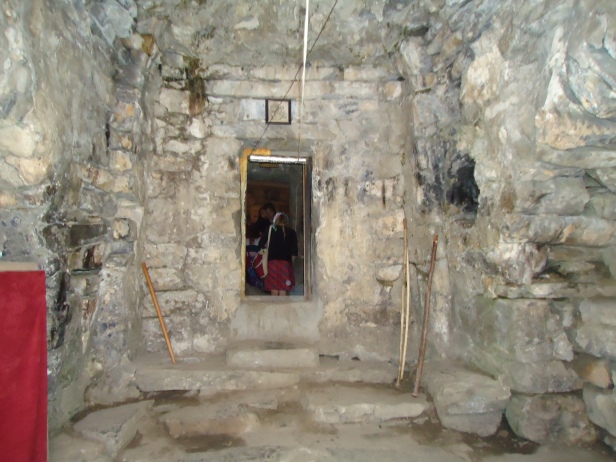 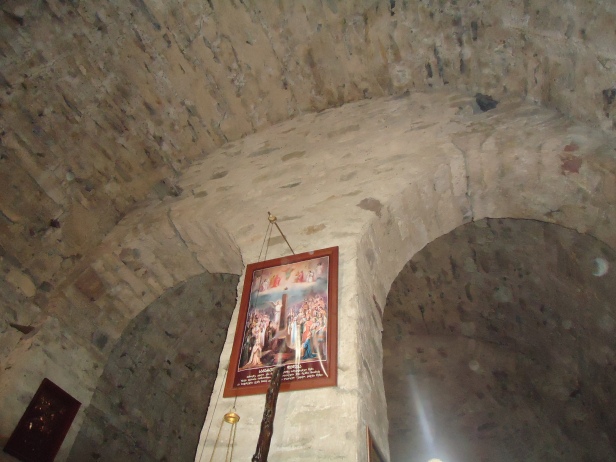 When everybody put the chain on the neck and made a wish, we had a little feast and had a toast of St George. 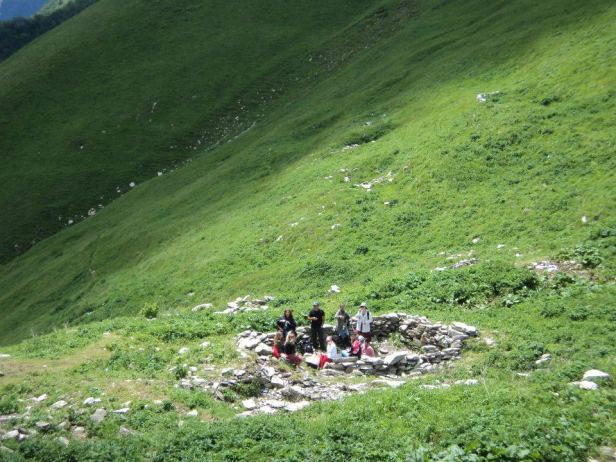 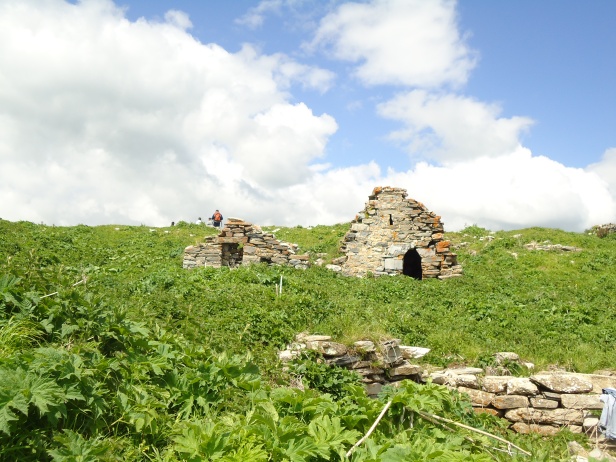 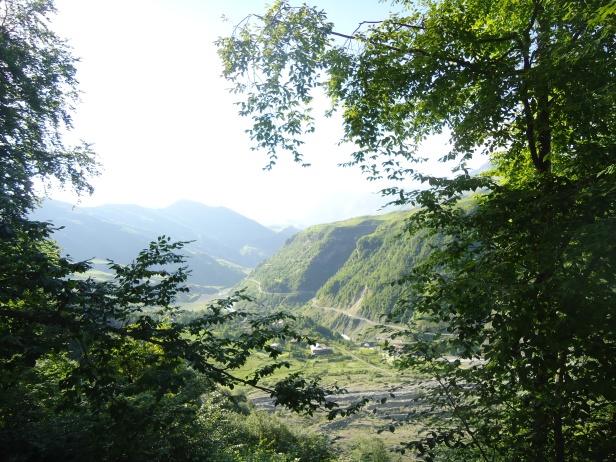