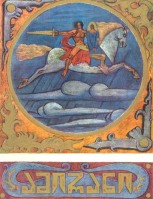 In Georgian mythology, Amirani is a hero, the son of the goddess Dali and a mortal hunter. According to the Svan version, the hunter’s wife learned about her husband’s affair with Dali and killed her by cutting her hair while she was asleep. At Dali’s death, the hunter extracted from her womb a boy whom he called Amirani. The child had marks of his semi-divine origins with symbols of the Sun and the Moon on his shoulder-blades and a golden tooth.

Georgian myths describe the rise of the titan Amirani, who fights devils (ogres), challenges the gods, kidnaps Kamar (the daughter of gods), and teaches metallurgy to humans. In punishment, the gods (in some versions, Jesus Christ) chain Amirani to a cliff (or an iron pole) in the Caucasus Mountains, where the titan continues to defy the gods and struggles to break the chains, an eagle ravages his liver every day, but it heals at night. Amirani’s loyal dog, meantime, licks the chain to thin it out, but every year, on Thursday or in some versions the day before Christmas, the gods send smiths to repair it. In some versions, every seven years the cave where Amirani is chained can be seen in the Caucasus.