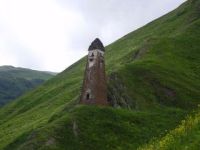 Kopala was a boy, who, once when he was alone at home, was kidnapped by Devis. He was made to work hard and eat an uneatable food. Kopala couldn’t run away because he didn’t know the way to his house. When he grew up he ran away and went to the monks. He stayed with them for a while and asked God to give the power to defeat Devis. God gave Kopala the power to fight against Devis.

Devis lived in Tsikhetgori and had a king. Their heroes were:Musa, Beghela and Avtandil. The king gave orders form the fortress of Tsikhetgori. Kopala went to Tsikhetgori and told Devis: “Go away! I must live here.” Devis were surprised. Kopala threatened if they didn’t go he would drive them away. Devis suggested holding a contest in boulder-throwing to see who could throw a boulder the farthest. Kopala agreed, so next day they gathered at Iremtkalo. The Devis’ champion picked up a boulder and hurled it across the valley to the mountain on the other side of the River Aragvi. Kopala tested a boulder, but decided it was too light. So he picked up another boulder, pressed it against the first, and threw them both across the valley. These nearly failed to surpass the Devi‘s throw, but at the crucial moment the God Kviria struck the boulder with his whip, causing it to fly further than the Devi’s boulder, and it landed on top of the Devis’ fortress of Tsikhetgori. As a result of their defeat in an ensuing battle which Kopala fought with his companion Iakhsari, the surviving Devis retreated underground allowing mankind to settle in the area unmolested.