Rkoni is situated in 100km from Tbilisi in the beautiful Tedzami gorge and belongs to Kaspi district, shida Kartli.  The place is rich with different kinds of architecture built at the initiative of Queen Tamar.
The fortresses, arch-stone bridge on the river Tedza, church carved in rock to save treasure – all these you can see when you travel to this beautiful place. 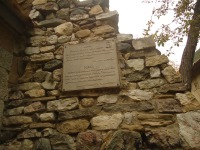 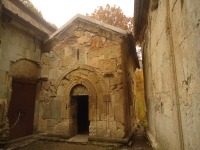 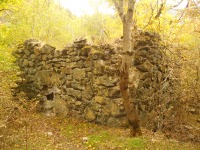 The complex consists of many buildings, and quite a few of them were built at the initiative of Queen Tamar. One can find here: the Church of the Virgin Mary – dating back to the 7th century, the gate of the complex – dating from the 13th century, a chapel, a church of John the Baptist, a bell tower dating from the 17th-18th centuries and housing for the monks. Inside the church there were candles that recent visitors had left behind.

As the monk who was selling candles told us the church of Virgin Mary had a miracle. St Mary appeared on the entrance wall of the church.

Not far from the monastery there is a spectacular 12th century stone arch bridge (King Tamara Bridge) over the river Tedzami and crossing this and climbing the hill brings you to another small church and cave carved in the rocks that was once used by monks. It is called Svimon mesvete church. It is three storied church. On the third floor you can see some frescos. 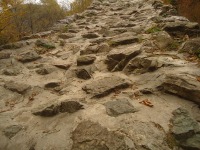 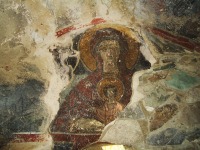 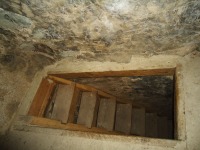 One cannot get to the monastery by car – it takes about an hour walk – wide forest path leads you along the river. 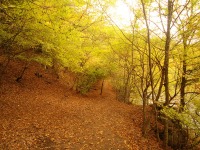 P.S. In the 12-13th centuries Rkoni was undergoing significant trade, military and strategic way, It connected Shida Kartli region to Javakheti and Trialeti and then, to the Middle East through Armenia. This prompted the Rkoni and its surroundings in monastery building.  In the XIII century a large feudal and statesman Kakha Toreli purchased and donated village Khovle to Rkoni monastery. In 1400 Temur Leng’s (Timur the Lame) troops raided the village and churches and monasteries. In the 16-18th centuries Rkoni was already well- fortified. In 1905 there was a workshop-laboratory in Rkoni, which produced weapons and explosives for rebellion.