There is a legend about building Hagpat. It is said that once upon a time a lord orders a master to build a monastery. The master and his son come to Sanahin and begin working. One day the father and son have a dispute. The son discomposedly leaves the building and goes away. After some time another lord orders the master’s son to build a monastery. Day by day son builds the walls of the monastery which become higher and higher. The master learns the news. One day he approaches to the unfinished walls of the monastery, watches them attentively, and then exclaims: “This is a really solid wall (hagh pat, solid wall)”. Then the master takes his son in his arms and they conciliate. Since those days the monastery is called Haghpat.

Today Haghpat is an active monastery in village Haghpat in the north of Armenia, 10 km from the town Alaverdi. Haghpat Monastery complex consist of many churches and buildings. They date to X-XIII centuries. On the second half of XIX century Haghpat becomes spiritual and religious center of Lore-Tashir region.

The largest church of St. Nishan was built during the kingdom of Abas I.  He was buried there too. It is the earliest building, which was buildt in 976-991 years. The Monastery is the best examples of medieval Armenian architecture.  Apart from one or two minor restorations carried out in the eleventh and twelfth centuries, the church has retained its original character.

A small domed St. Grigor Church dates to 1005, two side chapels were added to the original church, the larger one built in the beginning of the 13th century and the smaller, known as “Hamazasp House”, built in 1257. In 1245, a three-story tall free-standing bell-tower was constructed.

Other 13th century additions include the chapel of Astvatsitsini dates to XII- XII cc. There are special buildings-a Refectory, a library, a chapel, a wine-cellar. There are also a number of splendid-Khachkars. 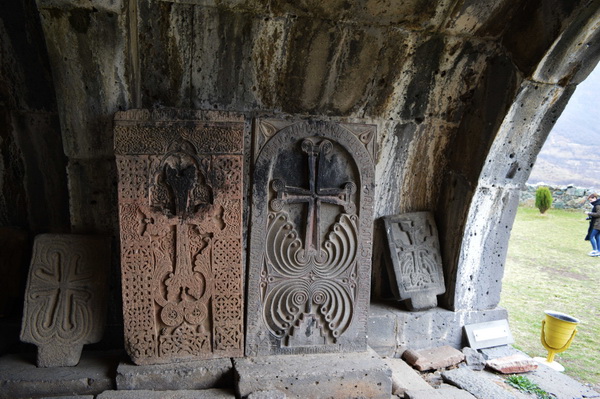 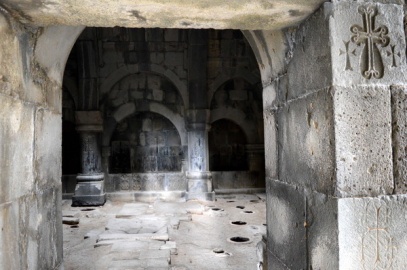 You can find Georgian inscriptions on the graves in the monastery graveyard.  On the main facade of Haghpat there is a bas-relief image of Ivan and Zakaria Mkhargrdzeli (longarmed).