A school and cultural center dedicated to preserving the ancient craft of producing qvevri has been built in Georgia’s main wine region, Kakheti.

The Qvevri School and Academy, located in the town of Ikalto, 110 km east of the Georgian capital, Tbilisi, is set to open in mid-2017.

Qvevri are the clay, amphora-like vessels used for the fermentation and ageing of Georgian wine.

In addition to classes and workshops by local artisans, the school and academy will comprise of departments for research and tourism for Georgian wine regions.

‘The school will have a scientific research centre for studying how clay from different periods [of history] were used in making different kinds of vessels,’ says Bishop Davit Makharadze of the wine-producing Alaverdi Monastery in Kakheti, and who helped develop the concept for the school.

‘Also, we are also considering to conduct classes in foreign languages as there is a growing interest from foreigners in our heritage.’

The project has been financed by the World Bank Group, costing over $1 million, and is being implemented by the Municipal Development Fund of Georgia under the country’s Ministry of Regional Development and Infrastructure.

Georgia’s traditional qvevri winemaking method involves pouring crushed grapes with their juice, stalks and pips into the hand-made clay vessels, which are then sealed and buried in the earth for fermentation and ageing to take place. 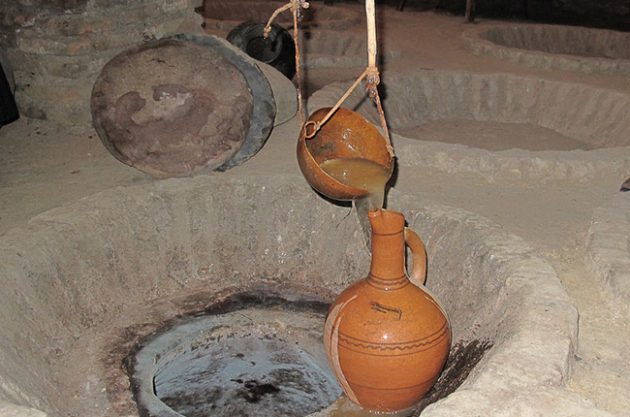 It dates back several thousands of years in Georgia, which is often called the ‘cradle of wine’ because of its 8000-year wine history.

As there is little, if any, chemical or technological intervention, this method has gained a strong following by natural wine producers throughout the world, including the United States, France, Italy, Croatia and Austria.

‘I like the style of wine from a qvevri, because it is so ‘close to the earth’,’ says Manuel Ploder of Weingut Ploder-Rosenberg in Steiermark, Austria.

‘Everything takes its time. There is such a nice expression of the phenols. The flow of energy is so good. In fact, I am looking to buy more Georgian qvevri.’

Only a handful of qvevri artisans still practice the craft in Georgia, mainly the Kakheti and Imereti regions. Production of Georgian qvevri has been listed by UNESCO as an Intangible Cultural Heritage of Humanity.