Village Dartlo in Tusheti Region is located in one of the most ecologically sound areas and owing to its vernacular architecture in general and fortress-like residential buildings in particular represents special interest for the tourists.  It should be emphasized that failing rehabilitation works, Dartlo will lose its attractiveness and the huge touristic potential inherent in this place.

The village is situated less then 20 km from the border with Chechnya. Except the ancient castles, houses and towers, there are also the ruins of Christian churches in Tusheti. Once, one of the towers of Dartlo was attacked frequently by the enemy. This tower had 6 stories: during the war the captives were kept on the first storey. Second, third, forth and fifth stories were used as the shelter for women and children. The sixth storey was used by the warriors to shoot and throw the stones. This tower is now standing in the middle of the village.

The church of Dartlo was reconstructed in the nineteen century. Today it is in ruins. For the village population, the church ground is sacred both because of the church and because of a shrine. So women aren’t allowed to approach the church.

You can see stony sofas next to the church. The elder people of the village were sitting on them, discussing some questionable matters, such as stealing, murdering, betraying and etc. It is a unique example of a tribal justice system. Initially the amount of chairs was twelve according to the number of judges. In front of the chairs standing in a semicircle, there were two stones placed in the ground. One represented the plaintiff, the other one the defendant. All justice cases were discussed at the “sabcheo”. So, Imagine twelve wise judges sitting on the semi circled set stones. There is a defender, a witness and the accused. Nearby there is a crowed of people. Oath ritual is done. Under oath stone there is a small hall, where there are moustaches hair of the process representatives. All these means, that matters customs judgments is started. The wise and intelligent daughter of Devdris Anta-Tushetian national hero occupied the main seat of the judge (Tavbche) at the end of the XVIII century. 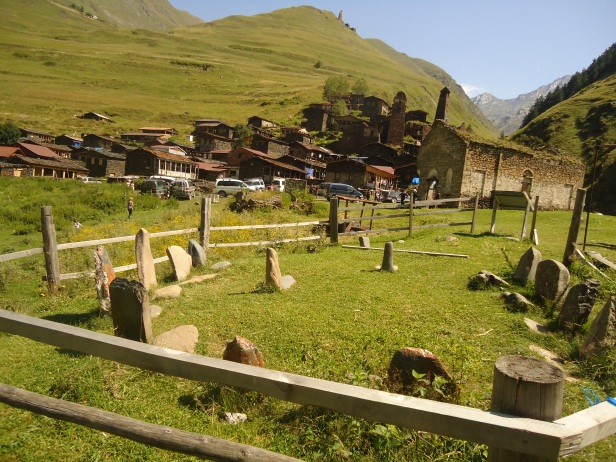 The “sabcheo”also had a function of a court. It would determine the charges, and the measure of punishment. In case the suspect did not recognize the crime he was accused of, he was made to swear by the cross, or by his ancestors’ grave. The highest measure of punishment was the “outcasting” from the community- to declare a cross knight an outlaw. At present, Tushetians settle their grievance within the community at large.

Rehabilitation works in Dartlo were launched in August of 2012, though based on the monitoring conducted within the period of September 17-October 11, the World Bank has ranked the project as unsuccessful,   which has induced a necessity of redesigning the projects.  According to the adjusted designs, which were developed by theNational Agency for Cultural Heritage Protection and the  Municipal Development Fund of Georgia, in course of current year 7 buildings will get rehabilitated in Dartlo, while the repair works for   27 buildings will be carried out in  2015.

At present the design documentation is submitted for approval to the World Bank.

Today most Tusheti folk only go up to Tusheti in summer: to graze their sheep or cattle, attend festivals, cater for tourists and generally reconnect with their roots. Many have winter homes in and around Alvani in Kakheti. The road to Tusheti is only open from about early June to early October, and some of the homestays may not open till July.

One thought on “Dartlo, Tusheti”